The conference titled "Refugee Law and Migration Policies from a Human Rights Perspective" was organised by the Gelişim Law Club students in cooperation with the faculty of law, with the participation of a member of the International Law department, Assoc. Prof. Tülay Yıldırım Mat and a member of the Department of General Public Law, Lecturer PhD Zeynep Ardıç , online on the Zoom platform on Saturday, April 23 at 17:00.

Conference has started with the speech of Assoc. Prof. Tülay Yıldırım Mat. Evaluating the compliance of Turkey and Europe's refugee policies with international human rights and refugee law, Yıldırım Mat stated that Europe follows discriminatory policies against asylum-seekers, and these discriminatory immigration policies are more evident during the admissions phase. She explained that discriminatory policies can cost human life as a result of acts such as being pushed at sea, sometimes cause situations against human dignity, and violate rights such as the right to life, the prohibition of torture, and the prohibiton of discrimination. She concluded that although Europe's refugee policies look in line with international law in terms of procedure, they are incompatible with human rights law in terms of substance.

Lecturer PhD. Zeynep Ardıç, on the other hand, began by explaining the phenomenon of migration. Ardıç evaluated the relationship with human rights through the causes and consequences of migration. She explained that national and international armed conflicts are the root cause of mass migrations and major human rights problems. In this respect, she stated that Turkey is the country that receives the highest number of refugees due to the armed conflicts in the Middle East, and that although Turkey is a transit country, it has now became a destination country because of Europe's anti-refugee policy.

The event ended after the question and answer session. 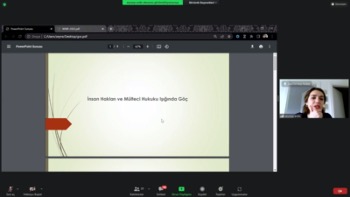 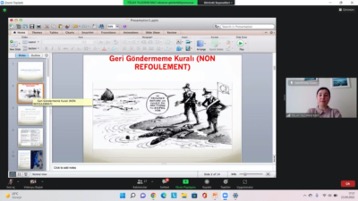